This post is the continuation of our introduction to some of the math that will be useful for the purpose of this blog.

Functions as Representations of Physical Behavior

When working on robots, we largely deal with a specific class of function - one which takes time, system conditions, and starting conditions as input, and transforms them into some physical quantity about the robot we care about. It could be pneumatic pressure in a tank, robot speed, arm location, anything really. All of the questions you could ask about “how fast” or “how much” or “what position” could be answered by functions of this class.

For a given situation, you can often create a model of the behavior you expect to see by writing down a specific equation. Using basic laws like , you can create a formula that predicts the behavior of a part of your robot. This model will never be perfect - there will always be “real-world” influences on the robot that cause slightly different behavior. However, as long as the model is sufficiently correct, it can be used to learn about the behavior of the robot prior to actually building it. This ability to analyze and learn without spending money is, for FRC purposes, the key benefit to creating these models.

Whether you’re looking to analyze a particular model you created, or look at real-world measurements of behavior, you usually used some form of 2d graph to visualize what is going on. On a cartesian plane, the X axis becomes “Time”, and the Y axis becomes “physical quantity you care about”.

For example, here is a model of pressure in a pneumatic tank, visualized how it changes over time:

Aside from time, additional inputs to this model include the volume of the tanks, the on/off state of the compressor, the physical capabilities and limitations of the compressor, and the fact the outflow rate is assumed to be zero - ie no cylinder movement, and you’re a really good plumber. Also assumed is that the initial pressure is zero.

Let’s say you were given this plot. You can answer a lot of questions about your robot right away, just by looking at it. For example,

The concepts covered in Calculus were simultaneously formalized by Sir Isaac Newton and Gottfried Wilhelm Leibniz in the late 1600s. Calculus is often taken in early college, or as a high-level math elective in high school. Despite having a reputation for difficulty, the fundamental concepts we’ll need from it are pretty trivial, and geometrically focused: slope of a curve and area under a curve. These lead very naturally to working with physical phenomenon are related to rate of change and accumulation of previous values.

Slope of a Curve & Rate of Change

What is more commonly known as Differential Calculus is really the study of the behavior of tangent lines to curves. In our previous example of pressure in a tank, we referred to the fact that pressure builds quickly at first, and tapers out as the pressure approaches the maximum value.

That rate of pressure change is related to a physical quantity - it’s the number of air molecules per second the compressor is placing into the air tanks.

Mathematically, we know any rate is some quantity that changes over time. Let us define a few things:

Let the function denote the pressure at a time given by .

We will pick some particular time, and call it . We will also pick some very small duration of time called .

Differential Calculus is how you go about finding the “instantaneous” rate of change at some particular time . Doing so is fairly simple. Simply look at the change of pressure over a small duration starting at time , and ending at time .

Let us introduce the notation to denote the rate of change of our function at the given time . Let us further introduce the vocabulary word derivative for the “dotted” version of any function. In this case, is the derivative of .

From studies of algebra, we should know that a line’s slope is defined as “rise over run” or “Change in Y over Change in X”. This concept of slope is analogous to rate of change. We use this fact to define the derivative:

Calculation at a Specific Point

Graphically, we can pick a particular time on our plot of pressure over time, and start to think about what value our defined would have there. We’ll start by picking .

For now, let’s choose to be exactly sec. Later posts on control theory will explain why this is a good choice.

Also, I’ll give you two important pieces of information:

On a real robot, these are numbers you’d get from a pressure sensor. If you were working with an equation that described the model of your pneumatics system, you could just plug in the times and to get the numbers. That’s actually what I did.

So, we have calculated that around the 2.0 second mark, the compressor is increasing the pressure in the system at a rate of 19.7 psi/second.

We have just calculated the derivative at a specific time . But, how should we calculate , over all time?

If you have an exact formula, there are various symbolic manipulation techniques that you can apply to get an exact formula for a functions derivative, given the function as input. This is rarely the technique used inside software.

Rather, if you have a series of measurements, you simply let a computer calculate one value at a time, for every measurement you have taken.

In either case, here’s the picture of (red) and (blue) look like:

Note in the mouseover that we are also drawing a line tangent to the curve for . “Tangent” means intersecting at exactly one point, not two or zero or any other number of points. This is the geometric interpretation of the derivative, which should be apparent from the definitions we’ve gone through so far:

A line drawn through the point with slope will be tangent to the curve P(t).

Using the point-slope line equation, along with the definitions we have presented thus far, this statement can be proven to be true, but only when you make very very very small. The act of taking almost to zero but not quite there is the calculus concept of “taking the limit as goes to zero.” Though the concept of a limit is an essential concept for understanding calculus deeply, we will skip it for now, as it can often be ignored when writing software.

Area Under a Curve

Integral Calculus is the other half of calculus that most high school students encounter. It primarily concerns itself with determining the area of the space bounded by the X axis, Y axis, the curve of some function, and some end-time.

It has many applications in Robotics, but is a bit more limited. Two aspects are worth considering:

These are really the same thing, as we’ll see going forward.

To provide some basis for integral calculus, let us assume we have a robot with a standard tank-drive drivetrain. We’ve written some code to allow us to measure its forward or reverse motion. We’ll assume we’re only driving forward and backward for now.

If you haven’t heard yet, when it comes to motion, calculus is frequently involved. There are three quantities that often come into play. We’ll discuss them further later on, but as a brief introduction, we will define the following:

As an example, say the driver operates the robot such that the measured velocity follows this curve:

Think about what this physically means:

Since the robot was only moving forward, where do you expect it to be at ?

For very simple curves this calculation of area under a curve is very simple. However, winding, jagged curves require a bit more thought.

Calculating the area of a single rectangle is easy:

If you were to make a shape out of many rectangles which do not overlap, the total area of that shape is just the sum of the areas:

We can use this concept to calculate the area under more complex curves.

Let’s say we want to calculate the distance the robot has traveled, and all we have is the set of velocity measurements referenced in the above examples. Recall from the introduction:

So let’s get the area under the given curve! That will tell us the distance the robot traveled from its starting point.

There are subtle other ways we could choose to subdivide the area, but we won’t get into that now.

If we were to add up all these rectangular areas, we’d get a number that’s a decent guess at the error under the curve. However, it wouldn’t be perfect. As you can clearly see, there is shaded blue outside the red curve area. How do we make it better?

Similar to derivatives, we will “take the limit”. In this case, we’ll try to drive the width of the rectangles to be smaller and smaller.

Suddenly, this is looking much better. Let’s try that magic 0.02 second interval:

Pretty darn good. We’ve got something that is clearly a workable approximation, with a trivial-to-calculate sum of rectangle areas as the methodology.

Plugging in our named functions, we arrive at the following relationship:

Note the summation just goes over all rectangles: is just a precise way to count the number of rectangles with the quantities we have. Note also that the quantity just means “time at the end of each rectangle”.

As we take the limit as goes to zero, standard calculus textbooks will introduce the more-familiar integral notation:

This is about as far as we’ll need to take the concept of an integral for now. Just remember it involves adding up lots of little bits of previous values to acquire the current value.

Obviously, we are just barely scratching the surface of these topics. For the early learner looking to go further, I have a few recommendations.

If you tend to learn well from lectures, animations, an emphasis on making things intuitive, or anthropomorphic greek letters, I highly recommend the youtube channel of Grant Sanderson, “3blue1brown”. In Particular, his series on Calculus is a good start, bringing excellent visualization to some of the less-intuitive calculation aspects of the symbolic manipulation side of the topic.

If you learn better from reading books and visualizing at your own pace, or like 100-year-old textbooks, Calculus Made Easy is a surprisingly hilarious option. 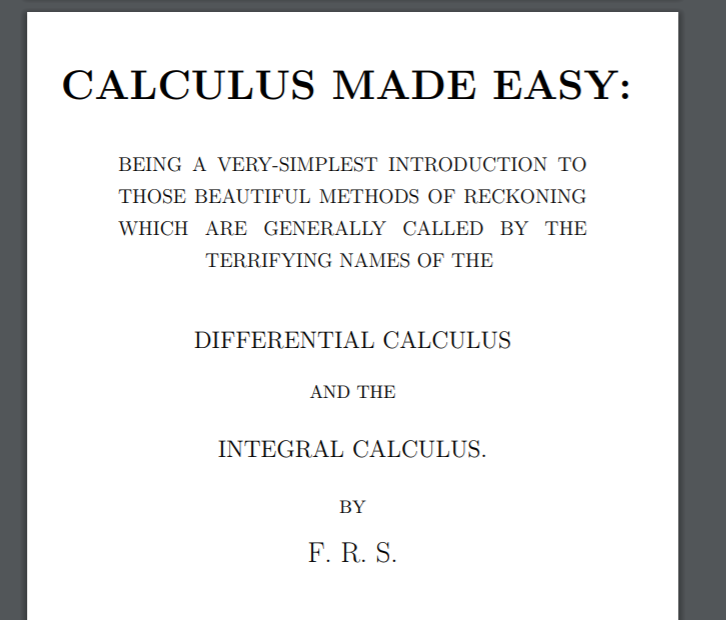 If a title like that doesn’t make you at least want to take a peek, I’m not sure what will.

It’s time to start some real Science! Go check out basics of electronics..