Let us change our traditional attitude to the construction of programs. Instead of imagining that our main task is to instruct a computer what to do, let us concentrate rather on explaining to human beings what we want a computer to do. - Donald Knuth

This post marks our first “pure” venture into the world of software. As a start, we’ll level-set everyone on the programming language syntax we’ll need to all understand to move forward. This is a bit of an “aside” from our normal progression, but required to move forward effectively.

On our Selection of Introductory Languages

In FRC land, there are a handful of different programming languages that are commonly supported. Labview is in its own special class. Aside from this, the big players are Java and C++, followed by Python and Kotlin. These are all powerful, professional, and (relatively) modern programming languages, each rich with its own features and quirks. For FRC purposes, any of them make a fine choice for writing robot software.

It should be noted that people have opinions on the selection of programming languages.

In order to do the ground-up approach properly, we’re going to not start with any of these languages, but rather with pure C. This will simplify the connection between how bits are manipulated on a processor, and the actual code we write. Additionally, once you understand the concepts of how C is put together, it becomes easy to see how the additional features provided by C++, Kotlin, Java, or Python could be implemented in C.

When describing programming languages, we’ve already used the description high level. As you’d probably expect, low level is also a description. Loosely, these terms describe “how close to the actual silicon of the processor are you?”. Closeness here refers to the number of layers of abstraction formally defined between the thing you are typing out on a keyboard, and the logic gates doing useful things in response to your typing.

The literal 1’s and 0’s going through your processor is probably the lowest level way to write a program. The people who truly believe this is the best way to write software are either dead, or literally crazy. 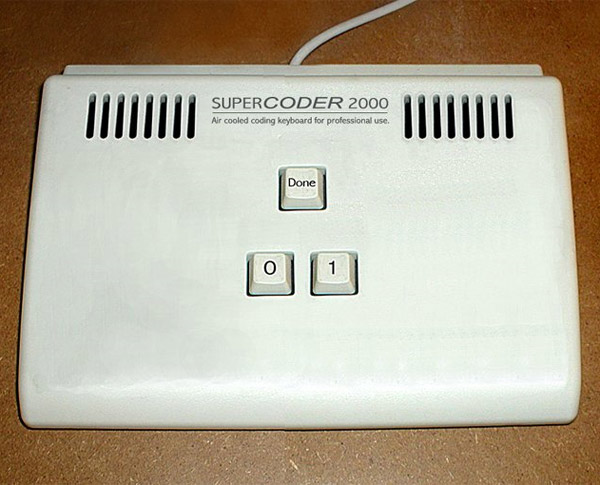 Depending on the application, it still makes sense to write code at this level. When you need very fast code, very efficient code, or very very precise code for working with specialized hardware, assembly is your go-to solution. And, if you know the hardware well, it’s admittedly not bad. Chris Sawyer wrote multiple video games using it nearly exclusively. People who like writing software here are still a special breed of folks, but not as crazy as the ones who have the ink on their 1 and 0 keys rubbed off from excessive usage.

For the rest of us folks, we usually use some sort of high level programming language. The official definition of a High Level programming language is simply one that attempts to abstract away the details of exactly which assembly instructions are supported or needed, and hide them behind a more generalized way of describing desired behavior. The key advantage of doing this is that you can write one program, and rely on different compiler tools to take that same source code, and emit assembly instructions which can work on many different types of computers. This interoperability is a key driver in lots of the design of high level languages, but comes at a cost - it is harder to interact with specific details of the hardware you are on, and inherently less efficient to execute code.

It should be noted that you can always add more layers of abstraction. A language doesn’t have to transform into assembly code - you can transfom between high level languages too. For example, MathWorks’ Simulink is a graphical programming language, much like Labview, which can have its block diagrams converted directly to C code. In this way, you can say Simulink is a higher-level programming language than C.

For specific use cases, there are other programming languages which can build into Simulink models.

This is why large software projects often have to combine many programming languages together. Your ultimate goal is simply to describe to the computer what you want it to do. You always want your software development to take place at the highest-level that makes sense - this allows you to have to spend the least amount of time thinking about details that, at the end of the day, an automated tool could have done for you. Only get into the nitty-gritty when you have to. But when duty calls, don’t be afraid to dive deep.

Super Basics - What does a Programming Language have to Accomplish?

Any programming language’s job is to bridge the worlds of human-readable description of behavior, to a machine-readable set of 1’s and 0’s that can flow through a processor. The compiler is the tool that actually does the action, and the language’s syntax is the set of rules on the compiler input to allow the action to work.

Remember the compiler itself is a program, and can’t think creatively (or read your mind). The language syntax is the agreed-upon rules that you will use to communicate information with the compiler.

The syntax must be flexible enough to be Turing Complete, but constrained enough to not force the human to think about too many details.

Good syntax design allows the programming language to describe all the calculations and logic required to establish a relationship between inputs and outputs. At the end of the day, that’s really all your software on your robot has to do - map driver inputs, sensor inputs, and field state (teleop/auto) to motor and solenoid commands.

Abilities Common to all Programming Languages

To be useful, all programming languages have to have a few basic components:

It was introduced in the late 1970’s, tightly tied with the development of the Unix operating system at Bell Labs. The initial goal was to provide a high-level language for writing utilities for the OS. It evolved quickly to be the language that the operating system itself was written in.

The amazing thing is that as other languages have come and gone, C has remained the de-facto standard for anyone looking to write software with the highest performance, highest efficiency, or most hardware interaction. C++ and Rust are starting to supplant it in a few places, but C is still by far king for operating system and embedded system development. The fact any programming language has lasted these 40+ years is a true testament to good design.